For 50 years, the adidas Stan Smith Shoes have been a staple on the courts and on the streets. Their minimalist style is the very definition of effortless cool. But even icons have to change to stay rooted in the present, which is why this version of the trainers is created with recycled materials. It’s part of our effort and commitment to help end plastic waste.

This product is made with Primegreen, a series of high-performance recycled materials. 50% of upper is recycled content. No virgin polyester.

Since 1973, they’ve more or less stayed the same. But now, Stan Smith sneakers need to change. Not in how they look, or in how they feel — but in how they’re made. It’s time the classic adidas Originals shoe became more sustainable. Became truly timeless. Without sacrificing the infamous design, we’ve reinvented the Stan Smith sneaker with a recycled PRIMEGREEN upper to do right by it. A new standard in sustainability, crafted in a classic silhouette. Because style and sustainability shouldn’t just go hand in hand, they belong on your feet.

Stan Smith sneakers get their title from the tennis star of the same name. The silhouette was first released in the late ‘60s, then renamed the adidas Stan Smith in the early ‘70s. At the time, the two-time Grand Slam singles and five-time Grand Slam doubles champion was known as one of the best players in the world. Over the years, the all-American shoe has evolved from athletic sneaker to fashion icon, appearing on runways, sparking collaborations and inspiring numerous variations on the theme.

The signature Stan Smith features an unfussy white colorway punctuated by a patch of vivid green on the heel and a line drawing of Smith’s face on the tongue. Stan Smith sneakers feature three rows of barely-there perforations to represent the 3-Stripes heritage.

Be the first to review “ADIDAS STAN SMITH(GREEN)” Cancel reply 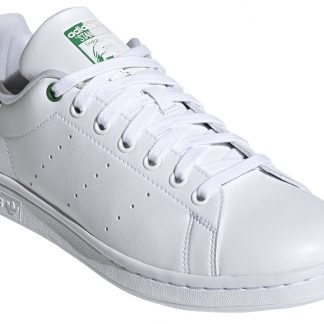