Created in 1917, the Converse Chuck Taylor All Star sneaker was the original basketball shoe. Its use has changed over the years, but it’s still perfect in its simplicity. With its timeless silhouette, vulcanized rubber sole and unmistakable ankle patch, the Chuck is ready for you to make it your own.

Soon basketball teams as well as American boys were wearing Converse “Chuck Taylor” All Stars. In the 1930s Chuck Taylor designed the white high top model for the 1936 Olympics, and the shoe with its patriotic red and blue trim became very popular along with all black canvas and leather models of the All Star. Today you can still buy either the bright optical white model or an off-white un-dyed model called unbleached or natural white.

After World War II, the classic black and white Chuck Taylor All Star High Top was introduced in 1949, a much more eye-catching shoe than the monochrome black models that had been produced up to that time. Basketball was now a major professional sport. Chuck Taylor All Stars were the shoe for professional, college, high school, and all serious players, and these distinctive black or white high tops were part of the look of each team.

In 1957 the low cut All Star was introduced and became popular as a more casual alternative to the high top. By this time Converse had an 80% share of the entire sneaker industry. Because of his tireless efforts promoting the sport, Taylor was called the “Ambassador to Basketball” and in 1968, Charles H. ‘Chuck’ Taylor was inducted into the Basketball Hall of Fame. Unfortunately, one year later he passed away. 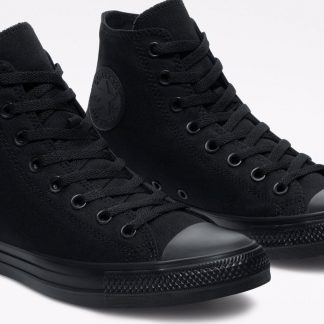