Make life easier, brighter, and much more interesting with Samsung Galaxy S5. This new stylish flagship has received unprecedented popularity in the market instantly after it’s launch. With several new unbeatable features like “S Health” and Heart rate sensor, Samsung Galaxy S5 comes with a technology designed to simplify and beautify user’s everyday life. It seems like an average slim & smart device at first glance but Samsung Galaxy S5’s thin body managed to combine several useful features whether it’s about promoting a healthy lifestyle or packing a whole portable multimedia center inside for first-class mobile entertainment. Samsung Galaxy S IV by Samsung is aimed at a wide audience, targeting consumers of every age and social group with an appeal to both young and older people. Now boasting a much more enhanced 16MP HDR Camera with LED flash, Galaxy’s S5 can take detailed photos with 5312 x 2988 pixels resolution and not just that the “Fast Auto Focus” feature lets you shoot and capture the action as it’s happening. There’s also a new feature called HDR on Samsung Galaxy S5 to provide you much more vivid and brighter photos and videos in Extreme light or dark situations with a live natural light preview. Selective focus on it allows you to focus on the subject only while taking the photos by stressing on the topic and leaving the background blurry and out of focus. Last but not least Samsung Galaxy S5 is much stronger, durable, and made to last as it’s resistant to water and dust so no more worrying about sweaty hands, or taking that important call while walking in rain. 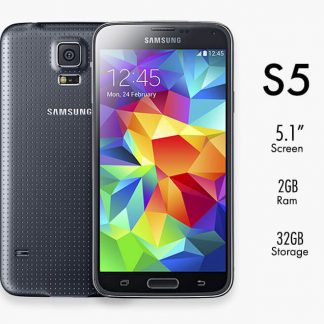